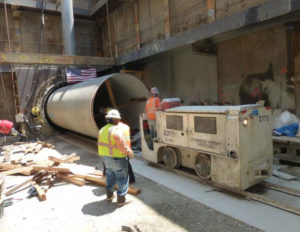 The Silver Lake Reservoir Complex is a $242 Million project located in Burbank CA and is one of several projects to replace open storage reservoirs in the Los Angeles area.  The US Environmental Protection Agency mandated that all open storage reservoirs used for drinking water be protected by covering or bypassing.  Without protections, these reservoirs are exposed to surface runoff, birds, insects, animals, algae growth, and human caused contamination. A trunk line which includes both tunnel and open cut steel pipelines connects two Silver Lake reservoirs which have a combine capacity of 100 Million Gallons and creates the complex.

The main components to this project included building the segmented concrete tunnel casing under Griffith Equestrian Park to the Silver Lake Complex and installing a 96” x .563” x 3200’ butt welded steel tunnel liner which is the subject of this slide show.  The project was performed during the hottest season (August) and mandated expedited/around the clock installation due to a delay of the preceding work. The design disallowed the use of welded pipe attachments for support and blocking which in turn required the use of block supports independent to the pipe. There were also no expansion joints or  means to accommodate thermal contraction expected during the installation. Following the expedited pipe installation approximately 2000’ of pipe was installed within the first 11 days and supported on nonorganic/plastic lumber intended for dead load support. During installation the pipe butt joints were stabbed into a steel backing ring and tack or root welded to provide a temporary connection.  The project Specifications required SMAW welding (stick/manual welding) which limited the finish welding progress rate and therefore welding lagged considerably behind the installation. While in process and after installing about 2000’ the temporarily tacked/rooted joints began to pull apart as a result of thermal contraction. As adding expansion joints was not allowed and SMAW welding could not keep up with the installation, the welding crews were instructed to perform a complete root weld plus one fill pass to restrain the contracting pipe, then slow installation down to the welding progress .  Ultimately the entire tunnel liner destroyed the support blocks and dropped several inches in elevation until settling on the toppled support blocks.

Several key issues were discussed during this process which included the temperature differential between the pipe on the surface and pipe in the tunnel being 33-50 degrees F. The resultant contraction was calculated to be over 5” axial with a force of 1.1 million pounds.  Therefore with a pipe weight of 44,000 pounds per section sliding over a concrete surface it was very unlikely any non-welded blocking would survive the forces.  The paper will disclose details of this operation plus several potential solutions which will mitigate these thermal events.